Jude’s potato plant looked dead: brown and wilted. Earlier in the summer, it grew full and green and had white blossoms at the top. This was exciting and new as the potato he planted last season never even grew a stem… And he was so hopeful.

Therefore, he was not sure about planting a potato this season. He didn’t dedicate much space – only one square foot – because he didn’t want to waste the room on a plant that didn’t produce.

So, he buried one and surprise! – eventually a little plant grew from the earth. Then that plant got bigger and bigger and almost too big for it’s square foot. But this was new and encouraging.

Toward the beginning of August, the plant started to wilt, and it was time for Jude to dig, to see if any potatoes had grown underneath. He pulled the stems out first, then started to dig with his hands… 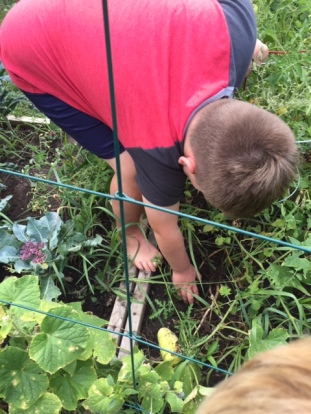